Why is the Myth of Water Dowsing with a Rod Still Around? – June 2021

Why is the Myth of Water Dowsing with a Rod Still Around? – June 2021

Why is the Myth of Water Dowsing with a Rod Still Around? 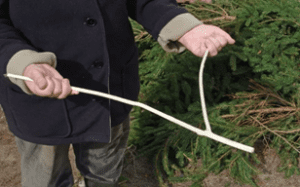 Access to a source of clean drinking water has been the key to successful settlements, cities, and societies since humanity’s beginnings, so finding water has always been incredibly important. Not everyone lives near a lake or river, however, so being able to reliably find underground sources of water became a critical and often revered skill.

What is Water Dowsing?

Water dowsing, also called “water divining,” is a belief that a person can use a medium of a divining rod (or other forked sticks) to mystically locate underground water sources.

For earlier societies, just look at their folklore and tales for innumerable explanations of “magic.” A god’s mood might dictate the weather, or Mother Earth might have blessed certain plants to grow. Things that could not be explained were believed to be magic, including not understanding how the physics behind something works.

What Does Science Say About It?

In reality, science says water dowsing does not work. Studies have been done to test water divining against ordinary detection methods under controlled conditions. Results have not shown that water dowsing is in any way more reliable at finding water than simple guesswork.

So Why Is It Still Around?

There are reasons why water dowsing has stuck around, even in a more scientific society.

It’s not really a surprise that water dowsing is still a practice that some people will swear by. There will always be people who will take the smallest anecdote as proof that all of science got it wrong. If you dig deep enough and in several different locations, chances are good that you’ll eventually hit some amount of groundwater, so there won’t be a shortage of those type of success stories.

Some people might still try to claim that water dowsing works for decades to come, but realistically you’re going to be much better off searching for water using proven science.

Electro-Kinetic Seismic (EKS) technology has been used successful for more than a decade to locate underground sources of water and accurately estimate the yield and flow of the source. American Water Surveyors is a nationwide leader in the use of EKS technology. Visit our website today to learn more about how we help you – scientifically – find water on your property.